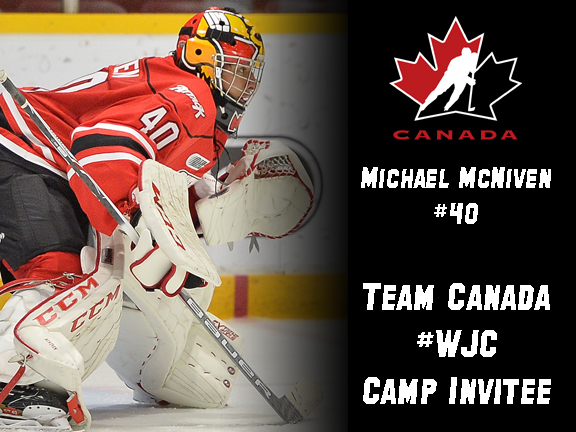 On Tuesday, Nov. 29, Hockey Canada announced the 32-player roster that will make up Team Canada’s World Junior Selection Camp and Owen Sound Attack goaltender Michael McNiven was one of three netminders named to the squad.

Taking place in Blainville, Quebec, from Dec. 10-14, the Selection Camp will reduce what is currently a 32 man roster to the 22 players who will don the Maple Leaf when Canada kicks off their tournament against Russia on Boxing Day.

McNiven, a 19 year old prospect of the Montreal Canadiens, will join Western Hockey League goaltenders Connor Ingram and Connor Hart as one of the masked men searching for a spot on Canada’s roster.

The Georgetown, Ont. native has impressed in the Owen Sound crease during the 2016-17 season, compiling a 13-5-1-0 record while leading the Ontario Hockey League in both goals against average and save percentage.

McNiven’s 2.29 GAA and .920 SV% are bolstered by a strong showing while representing Team OHL during the 2016 CIBC #CANvsRUS Series on Nov. 14 in Hamilton, a game that Team OHL won 5-2. McNiven made 25 saves in the win and was touted as being “the difference maker” by Erie Otters coach Kris Knoblauch who was at the helm of Team OHL for that game.

Drafted in 66th overall by the Attack in 2013, McNiven has put together a career 49-31-8-3 record while also posting a career 2.77 goals against average and .909 save percentage in three seasons of work for Owen Sound.

A full roster for Hockey Canada’s selection camp can be found HERE.