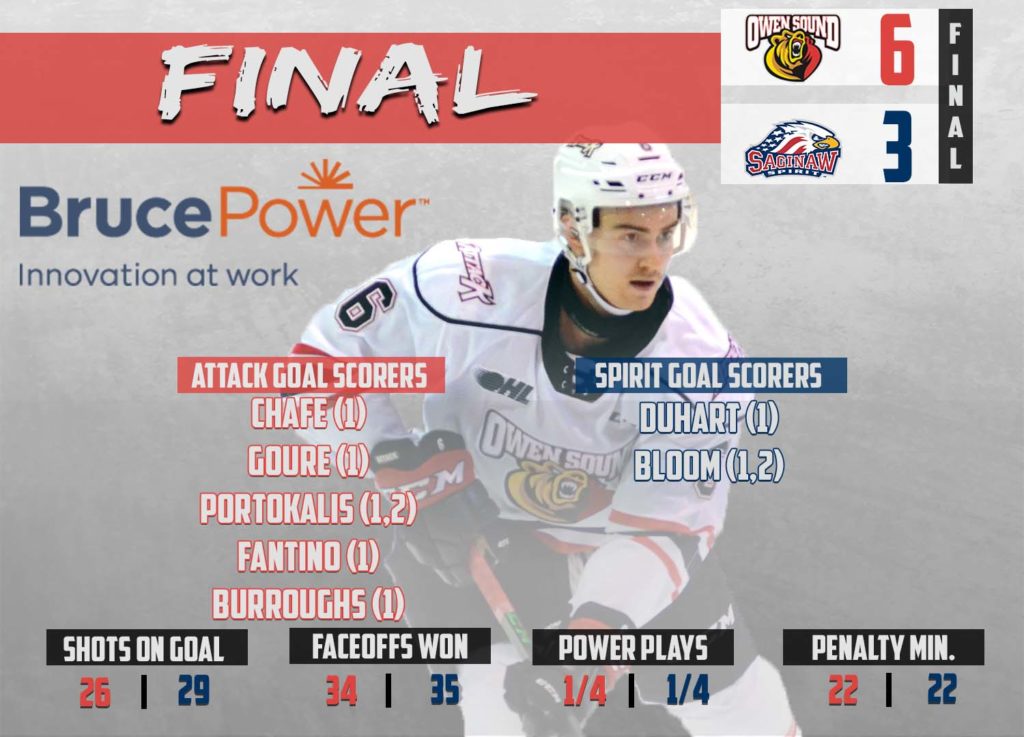 The Attack came out hungry and pumped as they quickly jumped out to a 3-0 lead just six minutes into the contest. It was the depth players providing the early spark, as the fourth line broke the game open just under three minutes in when rookie Thomas Chafe found himself alone in the low slot from a pass by fellow rookie Julian Fantino. Chafe made no mistake on his backhand as he put the home team up early. It then took just 15 seconds for the Attack to add a pair of goals to the board, with Deni Goure first taking a 2-on-1 pass from Stepan Machacek to make it 2-0. It was off a clearing attempt that William Portokalis showed great speed to coral the puck and found himself on a breakaway. The newly acquired Bear needed a second effort, but was able to jamb the puck home and give Owen Sound the 3-0 lead.

After setting up Chafe earlier in the period, it was then Fantino who was the beneficiary of a Chafe pass, with the rookie forward burying his second of the year, and giving the Attack a 4-0 lead just over 10 minutes into the game.

Corbin Votary got his third start of the season in net for Owen Sound, picking up his first career win. The rookie goalie was called on late in the first period to stand tall, as the Spirit tried to climb back into the game.

The visitors would eventually break through and get on the board almost half through the second period, when forward Dalton Duhart slipped a wrap-around attempt past an outstretched Votary. The Attack looked like they would get out of the period holding a 4-1 lead, but a quick shot off the rush by Spirit’s leading scorer Josh Bloom, would make it a two goal game going into the third.

Having been shutout on their first two power plays of the night, it was the old third times the charm, as Ethan Burroughs wasted no time off a face-off win to restore the Attack’s three goal lead with a power play goal early in the third. It was again Portokalis, where much like his first goal with the Attack, he found himself in the right spot in front of the net. Goure would chip a bouncing puck in front, right onto the tape of Portokalis, who’s second of the night made it 6-2 for the home team.

Saginaw would not go away with out a fight though, as it was once again Bloom who showed of his wrister, this time on the man advantage, to cut into the Attack lead and make it 6-3. From that point forward the Attack would hamper down and play solid defence in front of Votary, who came up with a couple more big saves late to hold onto the 6-3 victory.

As mentioned the win is Owen Sound’s fifth straight, but also keeps a point streak alive, as the Attack have now recorded points in seven straight contests.