OHL 20 in 20 Summer Spotlight: Kirwin and Woolley all in with Attack 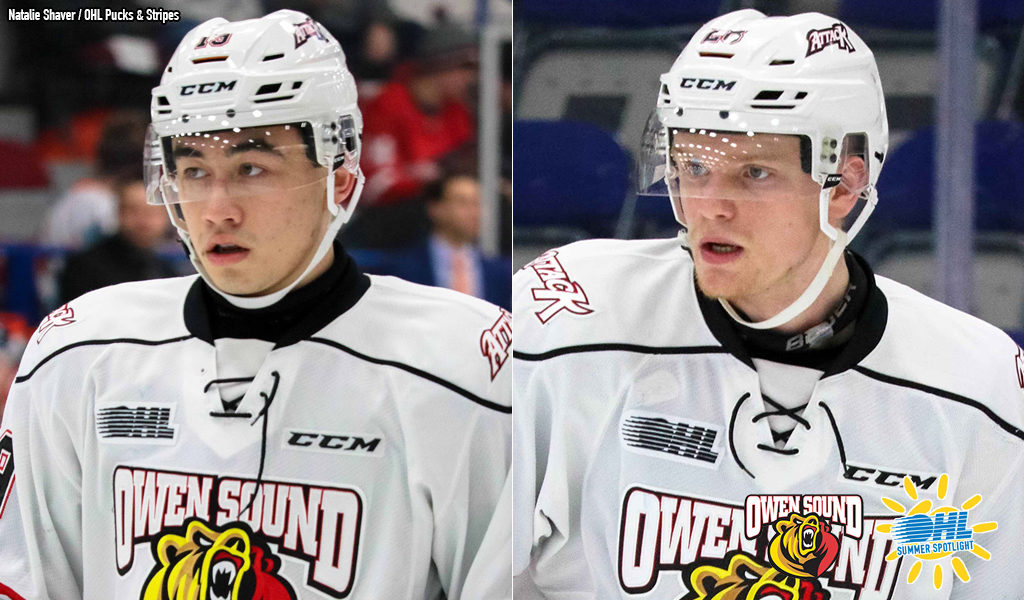 Two players involved in one of the more significant moves of the 2018-19 OHL season have settled into roles with their new club, eager to get back out on the ice later this month.

The Storm went as far as the Memorial Cup semi-final before Suzuki and Durzi saw their OHL careers come to an end at the hands of the Rouyn-Noranda Huskies. Now the Attack look to reap the return of the 19-year-old Kirwin and 17-year-old Woolley as they help lead the franchise into the future.

Join @woolbanger20x as Woolley’s Warriors looks to conquer diabetes with support and awareness for young athletes living every day with Type 1. #WW28 pic.twitter.com/4g8z8nIMup

“At the end of the day, to be honest, I’m actually really glad everything turned out the way it did,” said Woolley, a physical 6-foot-2, 202Ib. defender eligible for the 2020 NHL Draft. “I was a little blindsided at first, but I knew going into the deadline that I was going to be a guy that teams were looking at.

“It took a little bit to sink in but Dale (DeGray) is a great guy and he knows what he’s doing. I’m looking forward to seeing what’s in store for this coming season.”

Though watching their former teammates go on to hoist the J. Ross Robertson Cup was bittersweet, Kirwin says he did his best to take a positive perspective on the move.

“Nick Suzuki and Sean Durzi were a couple of the best players in the league last year. Going to Owen Sound in exchange for players like that speaks volumes that the Attack really wanted us to be a part of their future success and that leaves you with a sense of worth.

“Hopefully we can create something special up there this season.”

The Storm’s 6th round pick in 2016, @Barret_Kirwin used 159 games to consistently demonstrate a work ethic that Storm fans will remember for seasons to come.

An incredible teammate and member of the organization, we are proud to have had you. Thank you, Barret. pic.twitter.com/RrwVMshXJu

Kirwin, who had 21 goals, 22 assists and 43 points over 65 games last season, joins former minor hockey rival Aidan Dudas in Owen Sound. The two went head-to-head growing up as Kirwin suited up for the Barrie Jr. Colts and Dudas starred with the North Central Predators.

Both standing 5-foot-8 and approximately 185Ibs., the two centremen will give the Attack a nice 1-2 punch down the middle.

“We’re good friends and we’ve had some battles together over the years,” Kirwin said with a laugh. “It’s fun to finally be able to wear the same jersey and work together.”

As for Woolley, the hard-hitting defender joins other physical back end competitors in Andrew Perrott, Brady Lyle and Carter Robertson as the quartet will undoubtedly make the small confines of the Bayshore a tougher place for opponents to play.

“I think that’s one of the models we go by in Owen Sound,” said Woolley. “It’s a smaller barn and teams don’t necessarily like coming in there, so having that big, physical defence corps helps in that respect.

“Most of the guys on our blue line will be coming back this season, so it’s going to be fun to lay the body and make our opponents work for every inch.”

As for the mastermind who architected the Attack’s first ever OHL championship back in 2011, general manager Dale DeGray admits the moves his club made approaching last season’s trade deadline weren’t easy ones to make, but it was the right thing to do for the long-term success of the franchise.

“Sometimes the right thing to do isn’t always the most popular decision,” he said. “Whenever I looked into Barret (Kirwin) and Mark (Woolley), everything came back stellar. They’re both good teammates, good in the dressing room and good in the community and they’ve certainly provided that presence in the few months that they’ve been with us.

“Both players are going to play a big part in the direction of the franchise moving forward and we’re happy to have Barret and Mark in Owen Sound.”

The Attack hit the ice for their home opener on Saturday September 21st against the Ottawa 67’s.

Over 20 days in August ontariohockeyleague.com will shine a summer spotlight on storylines from all 20 OHL clubs.  See more from the OHL 20 in 20 series.