ONLY ONE GAME, BUT TWO IMPORTANT POINTS ON THE LINE THIS WEEK 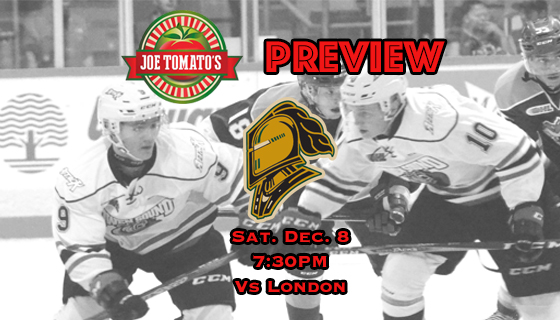 Only one game on the schedule for the Owen Sound Attack in Week 12 of the OHL Season. Saturday night the Bears will be home at the Bayshore to take on the Midwest rival London Knights.

Owen Sound currently has a record of 1-1-0-1 against the Knights this season, and will be looking to bounce back from a disappointing 7-2 loss in London just a few weeks ago. London is a very strong team this year though, boasting a 20-4-2-0 record.

London has given up the fewest goals by far, with only 64 on the year, and 77 being the next lowest total in Niagara. Jordan Kooy and Joseph Raaymakers have both been brick walls between the pipes, with a .936 and a .921 save percentage respectively.

The Knights have received tons of scoring by committee, as 13 players currently have over 10 points on the year. Connor McMichael leads the way with 27 points in 26 games. Captain Evan Bouchard has 15 points in 11 games, since the defenseman returned from the Edmonton Oilers.

The Attack currently sit 3rd in the Midwest Division yet 4th overall in the Western Conference. The Attack hold a 15-11-1-2 record, good for 33 points on the season. Kevin Hancock remains at the forefront of the Attack’s offensive prowess, with 49 points in 29 games. Hancock is tied for 3rd with North Bay’s Justin Brazeau, for the overall OHL scoring lead.

This will be Nick Suzuki and Markus Phillip’s last game with the team for a little while, as both are off to beautiful Victoria B.C. for the Team Canada World Junior Selection Camp. Both have had strong seasons thus far for the Bears, and will be pushing for a spot on the Team Canada roster this holiday season.

Suzuki has posted 20 goals and 21 assists in his 27 games this year, placing him comfortably in the Top 10 of the scoring race. Phillips is having a steady defensive year yet again, and has 9 points in 29 games, as well as winning the Huron Tractor Supply Player of The Week last week.

There are limited tickets still available for the game, fans can come to the MacVicar & McComb ReMax Attack Box Office to purchase tickets, or can go online to www.attackhockey.com as well as call the Box Office at 519.371.7452. The game can also be viewed on Rogers TV and OHL Live.

A reminder to fans that Saturday marks our annual Attack Hunger Food Drive. Fans are encouraged to bring nonperishable food items to the game, in support of the Owen Sound Salvation Army.