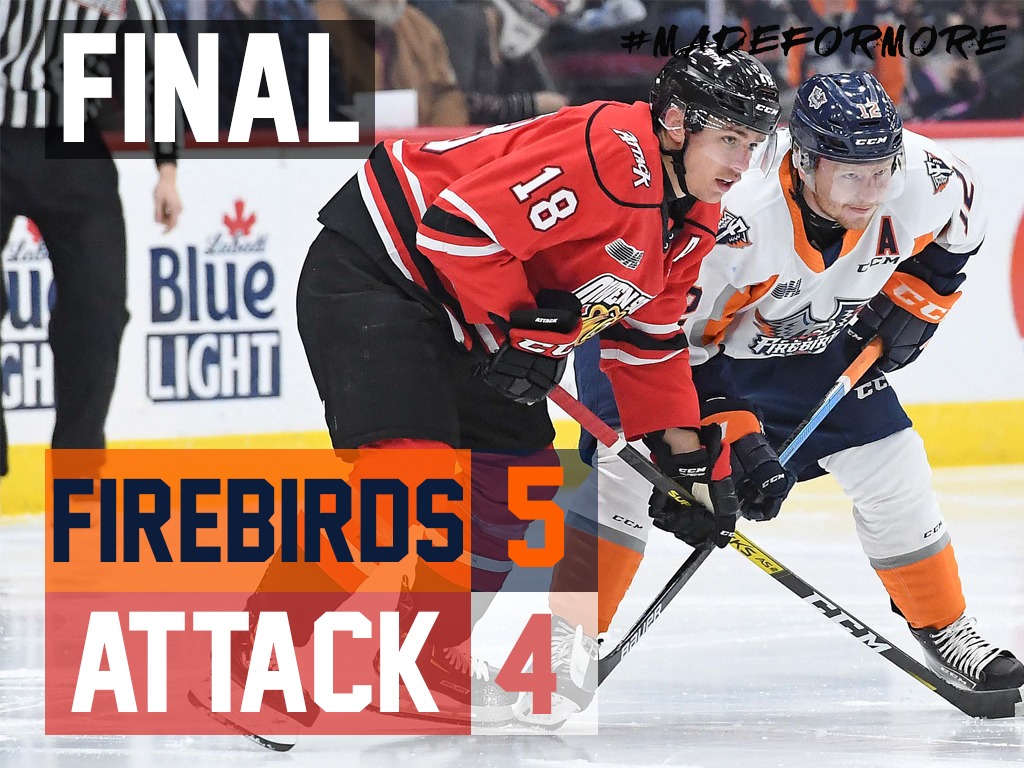 The Owen Sound Attack were hoping to stop their miniature slump as they crossed the border into Flint, Michigan on Saturday night. After almost making a comeback against the Saginaw Spirit but falling 5-4, the Attack knew they had to get back to winning ways against the Firebirds. Owen Sound won the first meeting of the season between the two teams 7-3, but Flint got revenge in the second game at the Bayshore, sneaking by the Bears in overtime after tying it with less than ten seconds remaining in regulation. Mack Guzda received the nod for the road team, playing in the same rink his father played in years ago with the Flint Generals of the UHL while Luke Cavallin received the start for the Firebirds.

The game started out sleepy through the first five minutes, with minimal pressure from either side. The Firebirds played and won the previous night against the Sault Ste. Marie Greyhounds while Owen Sound was on day three of a road trip. Eight minutes in, the first action of the game went the Attack’s way. Josh Samanski won a draw in the offensive zone and Brady Lyle snuck it past Cavallin with a wristshot from the point to give Owen Sound an early advantage. The Attack would kill off a penalty a few minutes later, keeping the high powered Flint offense off the board. With less than two minutes remaining in the period, Ethan Burroughs would feed Matt Philip in front of the Firebirds net, and he redirected it past Cavallin to double the lead. The Flint netminder was pulled after the second goal, with Anthony Popovich coming in to replace him. After twenty minutes, Owen Sound led 2-0 while being outshot 17-10.

Eleven seconds into the 2nd, Sergey Popov made it 3-0 for the Attack with his 6th of the season. Barret Kirwin made a ridiculous no look pass from behind the Flint net to set up the Russian forward in the slot and he made no mistake to bury it. Two minutes later, Owen Sound native Connor Roberts scored his 6th of the year to chip into Owen Sound’s lead. Things got a little more tense 2 minutes later, when Cody Morgan of the Firebirds managed to bat in a puck that bounced off the end boards into the net on the power play to cut the lead to one. With less than five minutes in the period, Vladislav Kolyachonok tied the game after driving to the Attack net, making it 3-3 as the Attack’s lead evaporated in the 2nd. The period ended with Flint scoring in the final minute for their fourth in a row and their first lead of the game, 4-3. The shots on goal after 40 minutes were 36-19 for the Firebirds.

Heading into the third, Owen Sound found themselves in the unenviable position of having to dig out of a hole. Down 4-3, the Attack kept pushing but spent much of the beginning of the period hemmed in their own end. Owen Sound was on the wrong end of the penalty calls in the game, heading to the box five times to Flint’s twice, and the Attack weren’t able to convert on their power plays. Riley McCourt scored his 9th of the season past the halfway point of the third to extend the Flint lead to 5-3. With just over 90 seconds left in the game, Barret Kirwin scored his tenth of the year to bring Owen Sound within one, but despite a late man advantage and Guzda pulled, the Attack weren’t able to find the tying goal to send it to overtime. The final shots on goal ended in Flint’s favour, 50-37.

The Hatten Home Building Centre Hardest Working Player of the Game was Carter Robertson. The Owen Sound Bug Juice North Stars were swept by the Flint Firebirds, with Oksentyuk, Morgan and Popovich earning the recognition.

Owen Sound is back in action tomorrow afternoon against the Windsor Spitfires hoping to snap the losing streak. Puck drop at the WFCU Centre is scheduled for 2 p.m. You can tune into the game on Rogers Grey County Channel 53, on 560 CFOS Bear Radio or stream online through OHLLive.com.