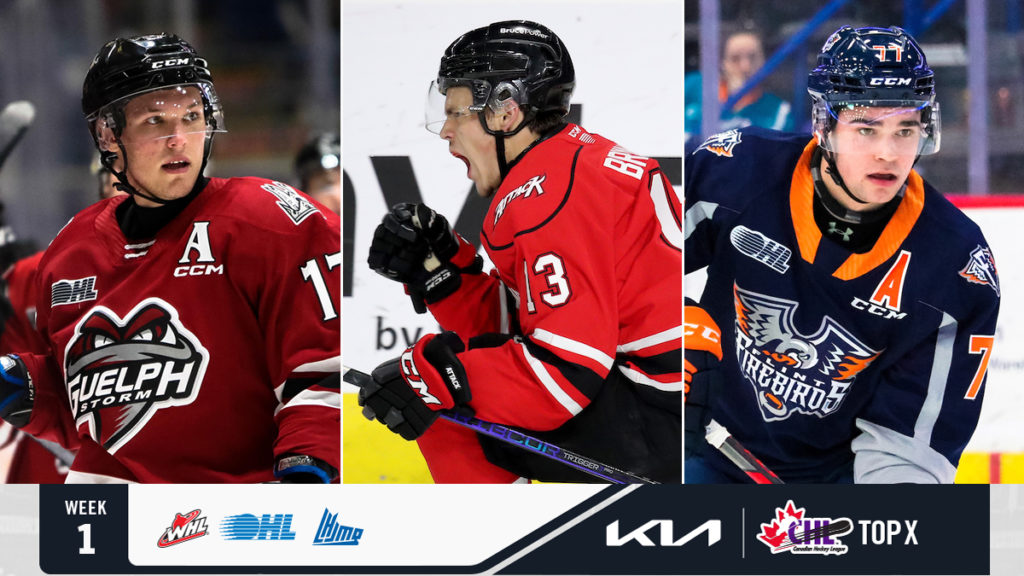 The Canadian Hockey League announced today the Week 1 edition of the Kia CHL Top-10 Rankings for the 2022-23 season.

Picking up where they left off, the defending Scotty Munro Memorial Trophy recipient Winnipeg ICE have had a perfect start to the new campaign, helping them to hold steady atop the national rankings from the preseason edition. Among the early success stories in Winnipeg is Arizona Coyotes 2022 first rounder Conor Geekie who netted his first career hat-trick in Saturday’s 5-2 road win against Medicine Hat. The second-overall selection from the 2019 WHL Draft finished last season with 70 points in 63 games.

Standing at No. 2 for the second week running, the Quebec Remparts have impressed in finding the win column in three of four outings underscored by Saturday’s 3-2 overtime decision against Gatineau that saw savvy overager Theo Rochette play the hero in the extra frame. Recently returning to the Remparts following a training camp tryout with the Philadelphia Flyers, Rochette continues to build his stock following a dazzling 2021-22 showing in which he tied for tops in team scoring with 99 points.

Remaining at third following a steady start to the season, the Seattle Thunderbirds have shown no shortage of offense in collecting 10 goals through a pair of appearances. Bringing a balanced scoring attack, eight different skaters have found the back of the net for the Thunderbirds including new recruit Kyle Crnkovic, an offseason addition from Saskatoon who has picked up three points in two games. The overage left-wing finished fifth in league scoring last season with 94 points.

Undefeated to begin 2022-23, the Sherbrooke Phoenix are drawing plenty of national attention as they climb the ranks early. Among the club’s four victories was a season-opening 3-1 win over nationally ranked Gatineau that saw a pair of goals come from veteran centre Justin Gill to power his team to the right side of the scoresheet. A recent invitee to the Vancouver Canucks rookie showcase, Gill has had a dominant start to the new season, already with a league-leading seven goals through four games.

Continuing to show solid play while their top talents remain at NHL training camps, the 2023 Memorial Cup presented by Kia host Kamloops Blazers found the win column in their second outing of the season, upsetting Spokane in a 4-2 final. Minnesota Wild draftee Caedan Bankier led the way with a one-goal, two-assist showing in his return to the lineup, while Dallas Stars up-and-comer Matthew Seminoff also chipped in with a multi-point performance.

The Gatineau Olympiques have picked up points in three of four outings highlighted by Sunday’s 3-1 win on home ice over nationally ranked Quebec in which Vegas Golden Knights 2021 first-round selection Zachary Dean pushed the pace with a two-point performance. Also up front, the Olympiques continue to see promising early returns from 18-year-old right-wing Joey Vetrano, an offseason addition from Victoriaville who has put up four points in as many games.

Continuing to add back their top dogs from NHL training camps, the Guelph Storm have picked up one point through their first two outings of the season following a hard-battled 5-4 overtime final versus Hamilton. Among the favourites from the OHL this season, the Storm boast an exciting nucleus of talent that includes the likes of Boston Bruins 2022 second rounder and budding centre Matthew Poitras who has put up four points in two outings to begin the new campaign.

Perfect to start the new season, the Owen Sound Attack picked up back-to-back victories over key rivals in London and Kitchener, with the latter seeing the club rally for the home ice win following an early deficit. Bringing an ability to draw scoring support from all areas of the lineup, among the key offensive contributors in Owen Sound this season will be captain Colby Barlow, a 17-year-old left-wing who projects as a first-round selection in the upcoming NHL Draft.

Taking to the ice only once so far, the Flint Firebirds came up just short Saturday against Niagara. Still, there is much to be excited about this season in the Vehicle City, most notably with captain Brennan Othmann. A 2021 first-round selection of the New York Rangers, Othmann will continue to round out his game this year while flashing his offensive magic, already on display in the season debut as he came away with two goals against the IceDogs.

Earning honourable mention the week prior, the Portland Winterhawks step into the national spotlight following a perfect 3-0 start to the new season that began with a 3-0 shutout decision on the road over nationally ranked Kamloops. Among the top early performers for the Winterhawks has been veteran centre Gabe Klassen, already with seven tallies through three outings including a dominant four-goal performance coming against Kelowna that helped power his squad to a 6-5 overtime decision.

Perfect through a lone contest this season, the Halifax Mooseheads return as an honourable mention following Saturday’s 5-4 overtime win over Cape Breton in which five different skaters lit the lamp for the winning side, while Columbus Blue Jackets draftee Jordan Dumais also pocketed a trio of assists.

Already drawing national consideration, the always defensively sound Everett Silvertips have won all three of their outings this season while outpacing the opposition by a 12-3 goal margin. Leading the way for the Silvertips is 2004-born centre Austin Roest with five points in three games.