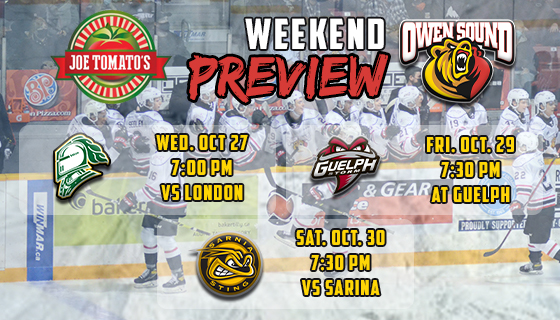 The Owen Sound Attack are coming off a 3-in-3 that saw them pick up just one win, but played well enough to win all three games. The recent strong play, along with consistency will be key as this young Attack roster looks to continue to build momentum and confidence.

Owen Sound will welcome a very familiar foe Wednesday night to the Bayshore, as they are set to face-off against the London Knights for a fourth meeting within the first 10 games of the season. The previous three meeting have all gone the way of the Knights, but not for lack of effort by the Attack, as each game has been decided by a single goal. The Knights were able to stymie Owen Sound’s power play during the last meeting, as the Attack went 0-9 with the extra man. However, the Bears roared back with a big 2-3 with the man advantage the following night, and look to bring that momentum with them heading into Wednesday night.

Owen Sound will hit the road for Friday night, as they travel to Guelph for a key match-up against the Storm. The Storm handed the Attack their worst lost of the young season, a 7-3 blowout at the Bayshore back on Oct. 13th, as Owen Sound looks for some revenge Friday. Since the last meeting, Guelph has gone 2-2, but are coming off back-to-back wins, including a big 4-2 win Sunday afternoon against the Kitchener Rangers.

The Attack round out the week by welcoming former head coach Al Letang back to the Bayshore, as his Sarina Sting are in town. Much like Owen Sound, the Sting have had their early season struggles, as they continue to try and get back in the win, having lost four straight since winning the season opener. The Sting do boast a strong tandem in goal, featuring Benjamin Gaudreau and Anson Thornton. Gaudreau was a recent 3rd round selection by the San Jose Sharks in the 2021 NHL Draft, while Thornton just recently signed an entry level contract as a free agent with the Anaheim Ducks. Though neither goal has stellar numbers to start the year, both are capable of stealing games for their team.

Fans can purchase tickets for both Wednesday and Saturday night either online or by calling or visiting the McVicar and McComb Sutton Reality Box Office. For those unable to attend the home game, or want to follow the Attack on the road, all the action will be on RogersTV Grey County Ch. 53, streamed on OHL Live, or broadcasted live on 560 CFOS Bears Radio.