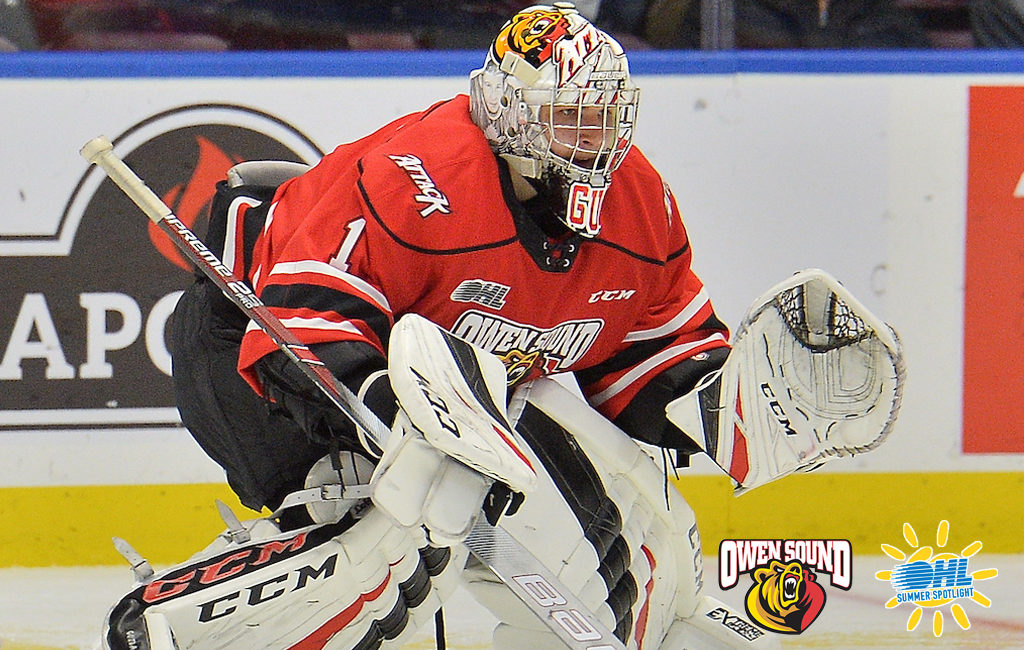 The legacy of goaltending is a strong one in Owen Sound, as evidenced by the facility that houses the hometown Attack – the Harry Lumley Bayshore Community Centre.

A number of prominent OHL netminders have stopped in Owen Sound on their path to the NHL, names like Jamie Storr, Kevin Weekes, Brent Johnson, Curtis Sanford and the latest of that line, St. Louis Blues standout Jordan Binnington.

Sitting just 28 games shy of the Attack’s all-time franchise games played record for goaltenders entering his 19-year-old season, Mack Guzda is quick to acknowledge the organization’s willingness to give him big opportunities at a young age, something less prevalent for 16-year-old goaltenders in today’s OHL.

“Those early opportunities, though they were challenges, gave me confidence and I think I’m a better goalie because of that today,” said Guzda, referencing a start in Game 7 of the 2018 Western Conference Semi-Final against the Soo Greyhounds. “I’m fortunate to be in an organization that is able to show confidence in a young goaltender and also be patient through development.”

Guzda is quick to admit his approach in the crease is different now than it was back when he broke into the league in 2017. Through growing into his big 6-foot-5, 210Ib. frame and spending time working with long-time Attack goaltending coach Greg ‘Red Dog’ Redquest, he’s developed more patience between the posts.

“I think there’s a lot more control to the way I play now,” said Guzda, who posted career bests with 24 wins, a 3.18 goals-against average and .900 save percentage over 51 games last season. “I found in my first two seasons a lot of pucks seemed to get through me. I addressed some of the things that led to that, and felt like I made a pretty big jump in my overall consistency with the way I played this past season.”

Redquest, a former OHL goaltender with the Hamilton Red Wings/Fincups and Oshawa Generals, concurs, giving high praise to Guzda for his intelligence, maturity and physical strength.

“As a young guy in the OHL, a lot of guys are all over the place,” he said. “With Mack’s size, 65 percent of shots are going to hit him if he just plays calm between the posts, and he’s come a long way on that. He’s won some academic awards and is a very smart guy, takes his training and conditioning seriously, and has really strong legs that get him across the crease and allow him to be very mobile for such a big goaltender.”

Guzda comes from unique origins having grown up in Nashville, Tennessee. Like a lot of young players from The Volunteer State, he was inspired by the hometown Predators and their presence in the country music capital. A father from Alberta put Canadian junior hockey on his radar from a young age.

Though he hasn’t been drafted by an NHL club, there’s been no shortage of interest from pro teams. Guzda attended Development Camp with the Florida Panthers last summer.

“He’s under the radar, but he gives us a chance to win every time he takes the crease,” said Redquest. “Consistency was a bit of an issue in Mack’s second season, but last year I really only recall him having two off nights, and we won one of them. He’s got some things he still needs to work on, but he should be very proud of the gains he has made and the goaltender he is becoming. I’m expecting he’ll have a really big year.”

Guzda has a lot going for him in terms of his academic achievements, standing as the only two-time winner of the OHL’s Ivan Tennant Memorial Award presented to the League’s top academic high school student. His professional interests include both pursuing a career as an accountant, or following in the footsteps of his mother, who is a lawyer.

More than anything though, Guzda’s sights are set on securing a pro contract, a goal he hopes he can achieve by continuing on the upward trajectory he showed in 2019-20 behind a team that has qualified for the OHL Playoffs 10 years running.

“I have to play patient, be big in the net and continue striving for consistency every time I go out there. It’s those things that will yield success for our team and hopefully take me where I want to go.”

Throughout the month of August, ontariohockeyleague.com will shine a summer spotlight on storylines from all 20 OHL clubs.  See more from the OHL Summer Spotlight series.