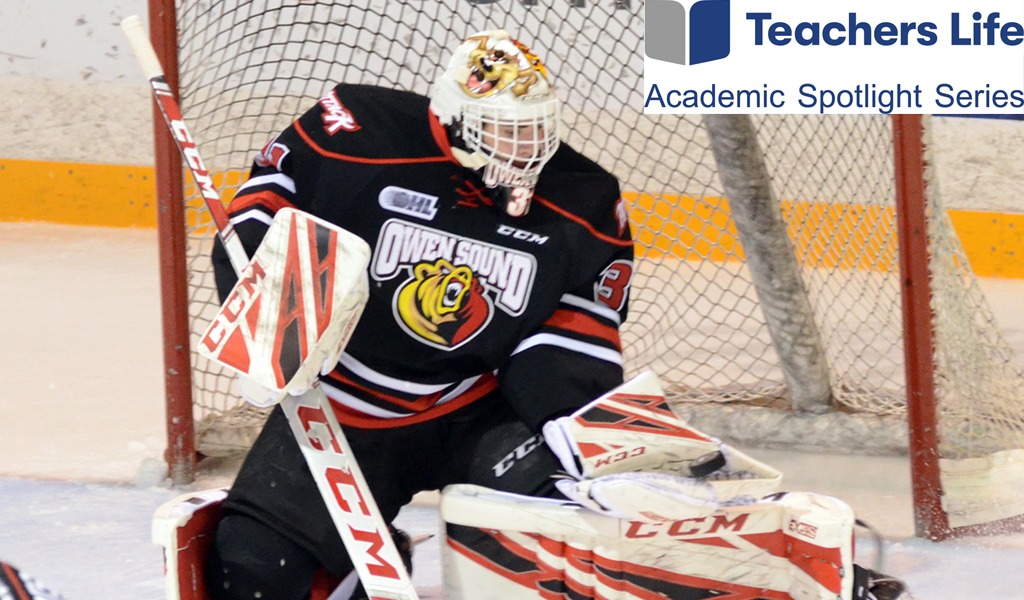 He speaks three languages, he ranked in the top ten last season for both goals against average and save percentage, he recorded a shutout in his first career road start and he did it all as a rookie that swapped schools midway through the year. Nick Chenard, the 18-year-old goalie from Tecumseh, Ontario, was picked in the 6th round of the 2018 OHL draft. After a year of playing for the Leamington Flyers, Chenard graduated to the OHL to share the crease in Owen Sound with another prodigious student, two-time Ivan Tennant winner Mack Guzda.

After beginning the season attending Owen Sound District Secondary School, Chenard decided that he would finish his high school education at Ecolé Saint-Dominique-Savio on the East side of Owen Sound. Making the transition was a natural one for the fluent French speaker, as he attended French schools before arriving in the Scenic City. Chenard speaks French, English and Serbian all fluently, with his father’s side of the family to credit for his French and his mother’s side for his Serbian. Throughout high school, Nick consistently achieved high 80s and low 90s, comparable to his outstanding .909% save percentage in the crease. Attending a different school than his teammates has led to some advantages and disadvantages. He can’t compare notes or do homework together at rink school, but he says it’s been a great experience and adds: “I think French school is just easier for me.”

Is there something in the nets in Owen Sound that leads Attack goalies to excel? His tandem partner Guzda isn’t sure. He says: “I’ve never heard of goalies being smarter than the average player, but I do like the logic.” If it’s not osmosis in the blue paint at the Bayshore, the veteran netminder has a couple ideas of why they might be having so much success in the classroom. He says that Attack Goaltending Coach Greg Redquest a.k.a. ‘RedDog’ is great for both of them in school, but Attack Educational Advisor Sarah Rowe is the real hero behind the scenes.

Nick says Sarah has been essential for helping him navigate his courseload and his hockey career. Rowe has set him up to finish his high school diploma this year with two more courses in Math and Law, and then he has plans to begin Criminology online with Athabasca University. Chenard isn’t quite sure what awaits him beyond hockey, but he has a keen interest in a career related to the law such as policing or being a lawyer. He’s currently focused on his time with the Attack where he has up to three more seasons in the Red, White and Black, but he’s keeping all options open for his bright future.

Throughout the Teachers Life Academic Spotlight series, we will continue to share our student-athletes academic successes and achievements.

“Teachers Life are proud sponsors of the OHL’s Academic Spotlight Program,” says Doug Baker, President and CEO of Teachers Life. “The dedication of the OHL’s student-athletes to their education mirrors Teachers Life’s commitment to students and educators across the province. By celebrating these athletes, they become role models to kids in their communities through their dedication to academic excellence, integrity and curiosity.”

About the Ontario Hockey League