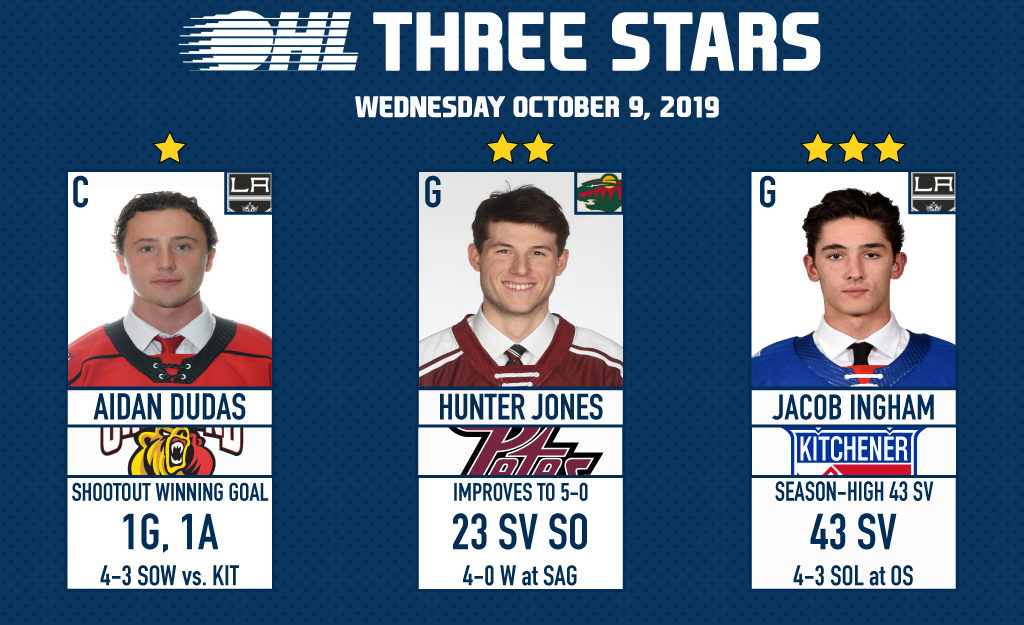 1ST STAR: AIDAN DUDAS (OWEN SOUND ATTACK) – 1G, 1A, SO WINNER
Los Angeles Kings prospect Aidan Dudas scored a bizarre shorthanded goal, tacked on an assist and netted the shootout winner as the Owen Sound Attack edged visiting Kitchener 4-3 on Wednesday. Dudas recorded seven shots on goal and went 9-for-18 in the faceoff circle as the Bears improved to 4-2-0-1. Dudas has points in three straight and a total of 12 pints (3-9–12) over seven games this season. The Parry Sound, Ont. native was Los Angeles’ fourth round pick in the 2018 NHL Draft.
• HIGHLIGHTS

2ND STAR: HUNTER JONES (PETERBOROUGH PETES) – 23 SV SO
Minnesota Wild prospect Hunter Jones stopped all 23 shots he faced, backstopping the Peterborough Petes to a 4-0 road win over the Saginaw Spirit. Jones’ fourth career OHL shutout saw the Petes pull ahead with four third period goals as Jones improved to a perfect 5-0 on the season with a 2.20 goals-against average and .924 save percentage. The 19-year-old from Brantford, Ont. is in his third OHL campaign. He was selected by Minnesota in the second round of the 2019 NHL Draft this past summer.
• HIGHLIGHTS

3RD STAR: JACOB INGHAM (KITCHENER RANGERS) – 43 SV
Los Angeles Kings prospect Jacob Ingham came out on the losing end Wednesday night, but managed to help earn a point for his club on the road. The Kitchener Rangers fell to the Owen Sound Attack 4-3 in a shootout as Ingham stopped 43 of 46 with his team heavily outshot. The 19-year-old Barrie, Ont. native is 3-1-1-1 on the season with a 3.41 goals-against average and .909 save percentage in his first six games with the Rangers. The former Mississauga Steelheads netminder was a sixth round pick of Los Angeles in the 2018 NHL Draft.
• HIGHLIGHTS