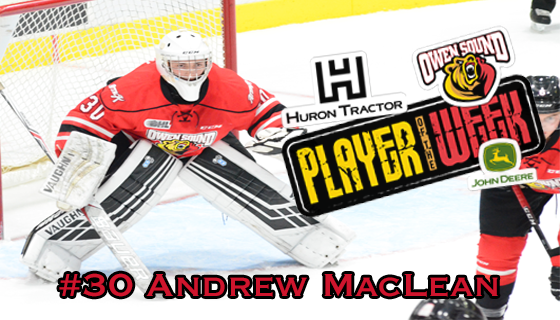 The Owen Sound Attack have named rookie netminder Andrew MacLean the Huron Tractor Supply Player of the Week in the 11th week of the Ontario Hockey League season.

The Port Huron, Michigan native has started in 8 games thus far as the back-up goaltender to Mack Guzda. This is the first time he has been awarded Player of the Week.

MacLean started in the game on Saturday against the Barrie Colts and only let in 1 goal on 33 shots on net in the game.  MacLean was also named the first star on Saturday night, assisting the team to a 3-1 victory over the Colts.

After Saturday’s game, MacLean improved his save percentage to 0.873, capping off his 5th win of the season.

Check out MacLean Video Highlights Below: