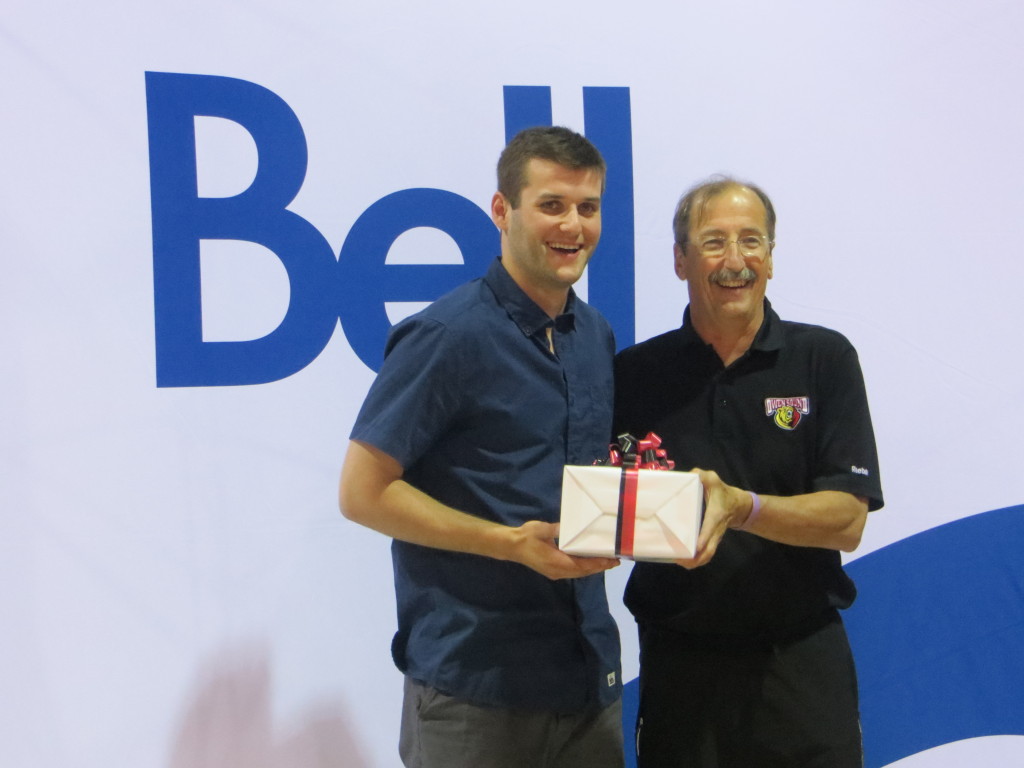 The announcement was made at the 2015 Bell Awards BBQ after the co-winners received the 2015 Ray McKelvie Award given out to the teams First Round draft choice.

“We’re extremely happy that Markus, Nick and their families are excited to be a part of our organization and a part of our City.”, said Attack General Manager, Dale DeGray. “Both of these young men are going to be big pieces of our future and we are really looking forward to watching them grow as players and as people.”

In 24 games last season, the 5’11, 204lb Phillips tallied 4 goals and 17 assists and was the first defenseman taken in the Priority Selection.

The Maple, ON native is described by OHL Central Scouting as “a skilled, offensive defenseman that loves to have the puck on his stick. He plays in every situation for his team and really excels on the power play, where he makes very good decisions.  Markus is able to beat the first forechecker and then make a solid outlet to one of his forwards. Has a very good shot from the point and is able to find an open lane due to great foot work on the blue line.”

Suzuki had a big year with the London Jr. Knights, where the forward tallied 34 goals and 34 assists in 31 games.

The 5’10, 173lb London native is described by OHL Central Scouting as a “a player that has high end offensive capabilities, is very elusive with the puck on his stick and is hard to contain when he is moving his feet. He sees the ice well and is a very good playmaker with the ability to make many different type of passes. Nick has a very hard and accurate shot and when given the chance in the slot he usually doesn’t miss. Nick has all the tools and assets to be a productive player at the next level. He has the ability to slow the game down at times.

Both Markus and Nick will be at the Attack Rookie Camp, which is scheduled to begin on Monday, August 31st.

While both players were present in Owen Sound after the Attack selected them in the First Round, they took the opportunity on Sunday afternoon to help the Attack unveil their new 3rd Jersey that will be worn both at home and on the road next season.

Prior to the awards portion, Caframo President Tony Solecki announced the continuation of Caframo as the Attack’s presenting Sponsor for the 2015/2016 season.

“We are very pleased that Caframo has come on board for another season as our Presenting Sponsor.”, stated Attack Director of Marketing and Public Relations, Brent Fisher. “This partnership has grown and evolved into something very special.”

The Attack continued the afternoon with their awards presentation.

Marking the end of the 2014-2015 Owen Sound Attack season, this year’s BBQ and awards ceremony saw Nastasiuk take home both the Jerry Reid Award as the regular season most valuable player as well as the Dave McComb Memorial Award for leadership and perseverance for the 2nd straight year. Nastasiuk was also named the recipient of the Players’ Choice Award. The Attack captain totalled 35 goals and 42 assists on the year, both of which were career highs.

Nastasiuk, who shared the Jerry Reid Award with assistant captain Chris Bigras (20 goals, 51 assists), wasn’t the only multi-winner on the day though, as netminder Jack Flinn also walked away with a pair of awards.

Flinn won the Becker Shoes Attacker of the Week award after being named the Attack’s player of the week most often during the regular season, while the Halifax native was also awarded the Butch Keeling Memorial Award as the playoff’s most valuable player.

The 2014-2015 Tommy Burlington Award for the team’s leading scorer went to forward Kyle Platzer, who scored 34 goals and 47 assists for a career high 81 points.

Platzer’s break out season saw him score more points in one year than all of his previous years in the OHL combined, but he wasn’t the only Bear to enjoy a big season.

Defenceman Damir Sharipzyanov was a rock on the Attack’s back end and contributed 34 points in a season that saw him win the Harry Kazarian Memorial Award as the team’s Most Improved Player.

Fellow import, Petrus Palmu, earned the Harry Lumley Memorial Award as rookie of the year thanks to an impressive 22 goal, 20 assist outing in 62 games.

Voted the team’s Ryobi Tools Hardest Working Player during the regular season, Liam Dunda showed you can combine brains with brawn as he was named the winner of the Howard Hindman Award for the squad’s scholastic player of the year.

Fan and teammate favourite Justin Brack took home the prestigious Dan Snyder Memorial Award as the player who maintains a positive outlook at all times in the dressing room, while a pair of graduating players were honoured for their commitment to the club as well.

Daniel Milne took home the Pat McReavy Award as the team’s unsung hero, while Holden Cook was named the Red Leckie Memorial Award winner as the player who made the largest contribution to the organization.

While two graduating players were honoured, the Attack also ushered in the next generation of players with 1st round selections Markus Phillips (9th overall) and Nick Suzuki (14th overall) winning the Ray McKelvie Award.