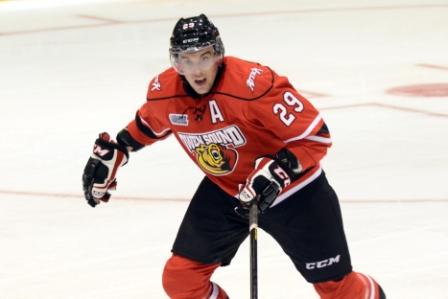 “You have to take one step to get to the next, so I am very happy to have made it this far and I am excited for the next game to come along,” the soon-to-be 21 year-old Ontario native said in a recent interview. “I am living my dream as a pro hockey player. “

But Gabriel’s dream of making it to the National Hockey League is confounding many who never gave him a chance and, to a degree, even has surprised Gabriel, who has found that working as hard as possible every day actually can pay off in the long run.

Head coach Kurt Kleinendorst is already impressed with Gabriel, who is among a group of five players assigned to Iowa for the final games of the 2013-14 season.  Team officials are counting on Gabriel, along with several other new players such as defensemen Gustav Olofsson and Dylan Labbe, who were brought in late this season to get a taste of the AHL. The team also welcomed another Minnesota prospect in Brady Brassart. They are expected to compete for spots on next year’s Wild AHL roster.

“He sure asks a lot of questions,” Kleinendorst said of Gabriel. “But I like that a lot from our young guys. He is a true prospect in that he clearly is willing to work hard and understands that he still has a lot to learn. “

Kleinendorst said that the addition of Gabriel and the other rookies have turned practices partially into sessions closer to training camp as the new ones begin to learn the Minnesota system. At the same time, the team is trying to put the best finish possible on a season that should have been better.

“This is the time when the new players really get exposed to the system so they are ready to take it on more fully when training camp starts,” Kleinendorst said. “At the same time, we want to finish the season well.”

Gabriel signed a three-year entry level contract with Minnesota last month following four seasons with Owen Sound where he built himself a reputation for tough play in the corners, a willingness to scrap and a growing ability to score.

In his recently completed final season, Gabriel scored 16 goals with 35 assists in 60 games — more points than he generated in his three previous seasons. He also averaged just under 100 penalty minutes in his last two years.

From the beginning, Gabriel said, it was clear to him that only hard work on and off the ice, as well as a willingness to learn the game, would help him overcome what would be politely called a major brush off from most hockey scouts in Canada.

Gabriel spent several years attempting to attract attention from clubs in the lower levels of Canadian youth hockey development. Tryouts on the Triple-A club level – two steps below major junior – were failures mostly because he couldn’t skate as well as the other players and would be easily knocked off the puck.

“There were times when I was out there and I couldn’t wait to get off,” Gabriel said in an interview last year.

Gabriel said part of his shortcomings were the result of believing he didn’t have the talent to become a professional hockey player.  At age 15 and attending Denison Secondary in Newmarket, Ont., Gabriel spent almost as much time playing baseball and basketball as hockey.

“I didn’t have anyone pushing me to choose a sport,” said Gabriel, whose family included only his mother, Kim, and his brother, Iain. “My Mom was always telling me to do what made me happy and do what I wanted to do. Even back then, I never had the mindset that I would make it to becoming a professional hockey player.”

In fact, Gabriel, a rangy basketball forward, seriously considered trying to play college basketball on the advice of high school teammate Kevin Pagos, who became the starting point guard at Gonzaga University. Pagos told him he was good enough to get a scholarship at small school.

But Gabriel said that one thing remained clear to him even as he considered other sports. “My passion was for hockey. I just loved the game that much and loved playing it,” Gabriel said.

As a result, Gabriel, who is 6’4’’ and 220 pounds, decided that he could at least get a scholarship to play college hockey in Canada, but to get it meant hours on the ice and in the weight room. At age 17, he surprisingly caught the eye of an Owen Sound scout who had noticed Gabriel’s energy as well as his physical abilities.

Despite having scored one goal and three assists that first season with the Attack, Gabriel received an invitation from the Phoenix Coyotes to their rookie tryout camp. That was when Gabriel figured out he could play at a high level.

“When Phoenix gave me a tryout, I was running around the house yelling, “How the hell am I going to an NHL tryout camp?  I got a lot of confidence down there because I played really well,” he said.

Throughout it all, Gabriel said he became more and more convinced that he could play professional hockey and when Minnesota drafted him last year in the 3rd round with the 81st overall pick, a dream that he really never thought possible came true.

“I was always that double A or single A player, not necessarily going anywhere in anything. But I always had this belief in myself and I could see I was getting better,” he said.

As for Minnesota, Gabriel calls the organization “the perfect situation for me.”

“Their emphasis on development is unbelievable. The only thing that they want to do is to make us get better as hockey players,” he said. “I intend to take every advantage of every single avenue that I can to get better. I couldn’t be happier.”

Gabriel also said that one of his major goals for next season is to return to Des Moines for the entire season and to help get the club into the playoffs. He said he is considering moving to the Twin Cities area to enhance his offseason training and skills in preparation for the 2014-15 training camp.

“I want to exhaust every option that I have. I want to come into camp really lean, faster, improve my skill set again to secure a spot and be really effective on a winning team,” Gabriel said.